I realized earlier this week that I'm already starting to forget some details from Hattie's pregnancy and birth. I want to make sure I remember every tiny detail as long as I can. I want to be able to tell her everything about her story when she grows up. I'm going to be totally truthful here. I already know these posts will be a hodge podge of details so just bare with me… 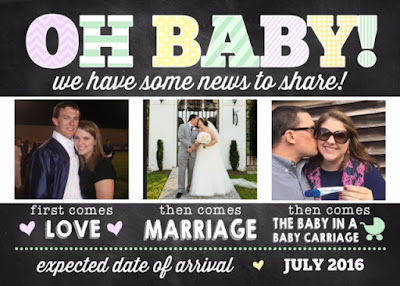 It's amazing how those cliches are so true. The first month that I didn't obsess over ovulation and pregnancy tests was the first month my period was late. Well, late for me I guess. It was showing up earlier and earlier each month and this time it didn't. I honestly just thought it was a fluke but figured I'd take a test so I wouldn't even have the chance to be hopeful. I am being 100% truthful when I say that I didn't even really entertain the thought that I could be pregnant.

I took the test when I woke up on Wednesday, November 4th, 2015. Chris was long gone so it was just me in the house. I looked at the test a couple of minutes after I took it and it only had one line. Negative. So, that's that, I thought. I laid it down and stepped in the shower and didn't think much else about it. It was the last test in the box and I thought to myself that I wouldn't buy another test until I felt like I really needed it.

After I got out of the shower, I picked the test up to throw it away. I don't know how your brain works, but I know I didn't specifically mean to look at it again. Somehow deep in my brain, I recognized a blue plus sign. Not a maybe, not a faint plus, but a definite blue plus. I jumped, squealed, dropped the test, and yelled "Oh, shit" all at the same time. I just remember covering my mouth, grinning from ear to ear, and saying "Oh, shit, oh, shit, oh, shit" over and over again! (Sorry, dad)

For some reason, my first reaction was to take a picture of the test. Thank you, iPhone, for telling me that I took that photo at 6:26 AM that morning. I probably take 50 pictures a day and am constantly sending them to Chris, my sister, my parents, my friends, and my colleagues. I think I correspond more with pictures than with words these days. As soon as I took the picture I realized I couldn't send it to anyone! I can't even begin to tell you how much self control it took me not to send it to everyone! I knew that I would only get to do this once and I wanted to make it special.

I would love to tell you that I am a patient person, but that is just plain laughable. I wish I was the type of person to take my time and really plan how I wanted to tell everyone, but I was just too darn excited. On my way out the door I grabbed the test, a gift bag, and some tissue paper. I also took a selfie for good measure... I knew there was no way I could make it through the day without telling my girlfriends at work! That's definitely the most excited I've ever been to go to work. Ha!

I got to school a little early and was the first person on my team to get there. I knew my teammates wouldn't be there for a while, but I still sat in the desk outside of my room just in case! I text my friend, Keshia, and told her to let me know when she got to school. I knew she'd be right behind me and I was about to burst!

She text me when she was in her room and it was all I could do not to run across the hallway! I told her I had a little surprise for her and handed her the green gift bag. She opened it and squealed immediately! I am so glad I videoed her response and can watch her scream "Thank you, Jesus" forever! I heard the kids coming down the hall so I ran back toward my room. I spotted my teammate, Lindsey, go into her room so I followed her in and slammed the door in the poor kids' faces! She had the same reaction and I had so much fun sharing the news!

My other teammate, Emmelyn, was next door to my room. By the time I got to her, the kids were already in our rooms. It was so hard not to tell her anyway, but I wanted to be able to video her reaction and of course I didn't want the kids to know yet. I waited until the kids left for connections and gave her the green bag. It took her a minute to figure it out because I told her it was a gift from the kids! She said "Who gave you… Wait, wait… this is you!" I know some people think it's crazy I told my girlfriends before I told Chris, but I just couldn't wait a minute to share the news with them! I wouldn't trade it for the world!


Obviously I was a little preoccupied at work that day… I thought all day about how I should tell Chris. Like I said before, patience isn't exactly a strong suit of mine. It would have been great to order something personalized or plan some cute reveal, but there's no way I could have kept it from him that long. I thought about it all day and I bet I looked at a thousand pins on Pinterest!

I came up with a couple of possible ideas and stopped by a couple of stores on the way home. (This is a good time to note that I also bought two more pregnancy tests and took them in the target bathroom to be sure!) I made a couple of things but nothing felt right. That's when I remembered the backpack! Chris and I bought a baby carrier in Gatlinburg several years ago. I think it was actually before we were even married! We had joked about buying it since we were teenagers and one year it was on sale. We bought it and it had been tucked away in an upstairs closet for years.

I got the backpack out and brought it downstairs. I found a sweet poem online and wrote it down for Chris with our expected due date. I tucked it inside the front pocket along with the three different pregnancy tests. I sat it on the floor where Chris would walk right in and see it. Then, I waited… and waited… and waited… It just so happens that this day was the latest Chris EVER came home from work! What are the odds? He worked almost 16 hours and didn't get home until after 10:00. I would have killed him if I wasn't so darn excited.


I heard the garage door open and I hid behind the wall where Chris couldn't see me. I got my phone out and got ready to record his reaction. Before he even turned the corner, he knew. He had the sweetest reaction and I'm so glad I caught it on video!

That weekend we went to Gatlinburg on our annual trip with Chris's family. We told my parents LATE the night before we left. We got stuck in construction traffic and it took us 2 extra hours to get to their house that night. I stuck the test on one of our dogs and waited for them to see it. I wish I had done something a little more creative but I just couldn't wait another second!

We told Chris's parents in private before we told the rest of his family. His Grandma Loretta's reaction will forever be one of my favorite memories. Chris prayed for our sweet baby and she was in shock! I caught my closets friend's and family's reactions on video and I am so glad that I did. I still love looking back and watching them! This is the video I put together…

I can't wait to share Hattie's story with her when she gets older. Now onto Part 2: My pregnancy.