If you know me at all then you know that I am crazy about animals. I'm a huge advocate for spaying, neutering, fostering, and rescuing.

I grew up in a family of the same kind of people so I got started much younger than most people. As long as I can remember I've wanted to help animals and educate people on why you should spay, neuter, and adopt.

My mom grew up in a house full of kids and animals alike. She and my aunt have spent more time, energy, and money helping animals than I can even imagine.

My aunt will literally take in any animal that needs a home. No matter its species, sex, size, color, or health. She has found so many good homes for so many pets in my lifetime alone!

My mom stops on the side of the road just to offer to take someone's pet to the vet so it can't have another pitiful litter of babies. I'd love to know how many lives she's saved just by spaying and neutering other people's animals.

My cousin has stopped in the middle of the interstate to save countless chickens that have fallen from chicken trucks and find them a happy home. She went into labor with her twins because she fell while trying to save a kitten!

My sister stopped her car to hold a homeless dog that someone else had hit in its final moments of life. I can't think of anything more important than showing an animal how much it is loved before it is gone.

Save one until there are none… that's my motto.

Thanks for reading :) Now, to Alice…

I have wanted a husky my entire life. Before I was born a malamute showed up at my parents house. They named him Bud and loved him like no other. I saw the pictures and heard about how special he was my entire life. Unfortunately someone shot Bud and my family was devastated. We always had other animals because we would take whatever showed up and needed a home so there was never an opportunity to pick out another dog.

I had every Lisa Frank and Ty husky product there was! I drew pictures and wrote stories about huskies. The last thing my Grandpa got for me before he died was my beloved "Puppy." 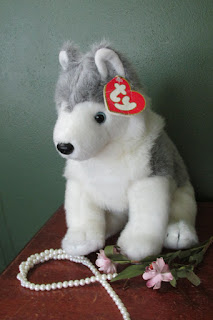 It was love at first sight but my parents wouldn't get him for me. Naturally I pitched a fit and my Grandpa snuck back to the toy shoppe in Gatlinburg and picked him out just for me. I still sleep with him to this day at my parents house and will treasure him forever.

I've known forever that I couldn't and wouldn't go out and buy a puppy. I always knew I would adopt an adult because there are so many that need homes. My sister, Haley, and I started looking at the local shelters when we had our house in Athens. Huskies are ALWAYS in the shelters so it's very easy to find one with a little searching. We saw several but it never felt right.

One day while we were at work Haley called me into her office and showed me Jasper's picture at the Athens animal shelter. We took our lunch break right then and went out to visit him. It was love at first sight! He looked just like my puppy and we knew we had to have him. We filled out our paperwork and somehow managed to be the first ones in line. 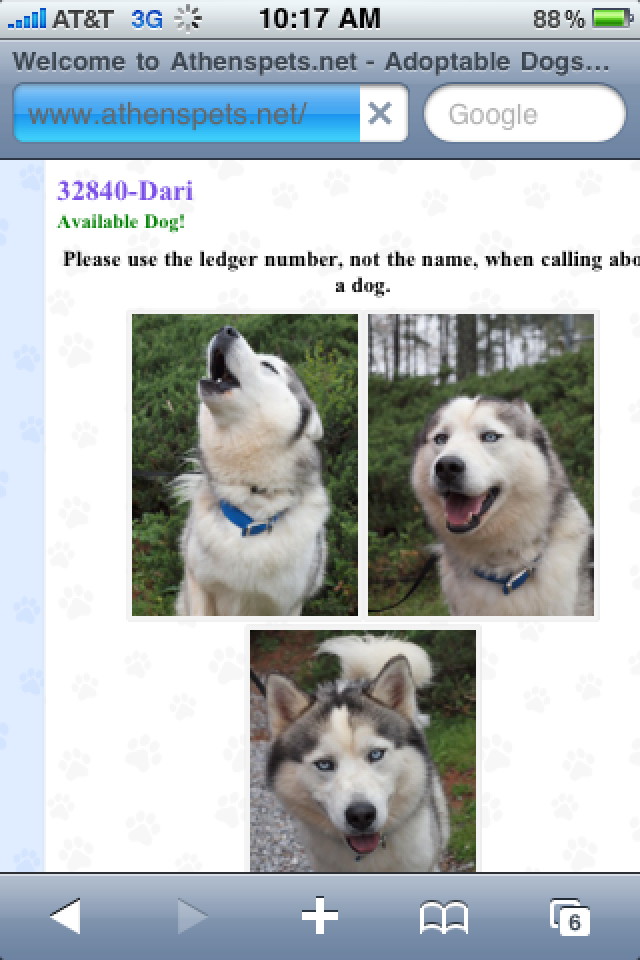 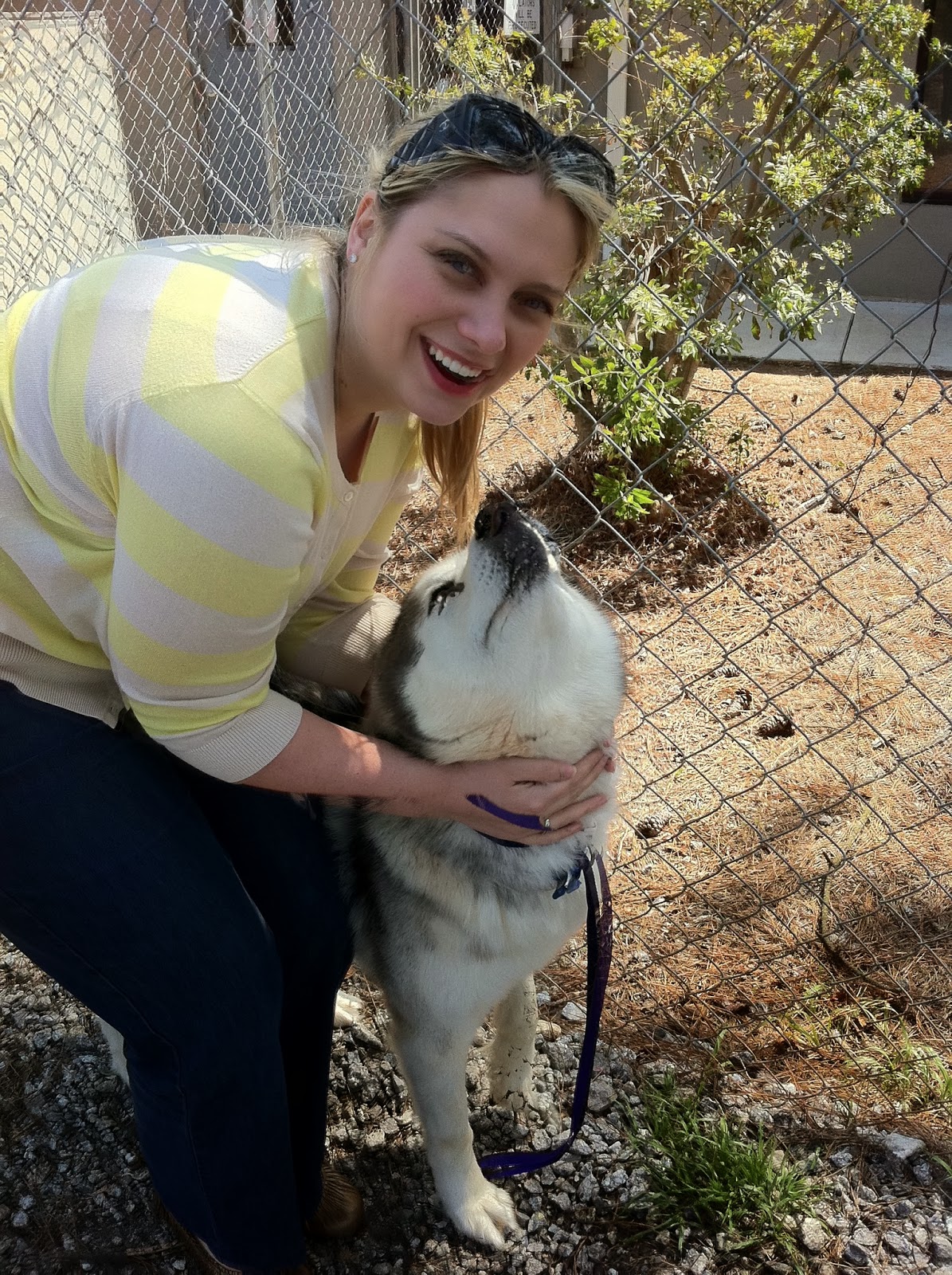 Visiting Jasper at the shelter. We went every day until it was time to bring him home. 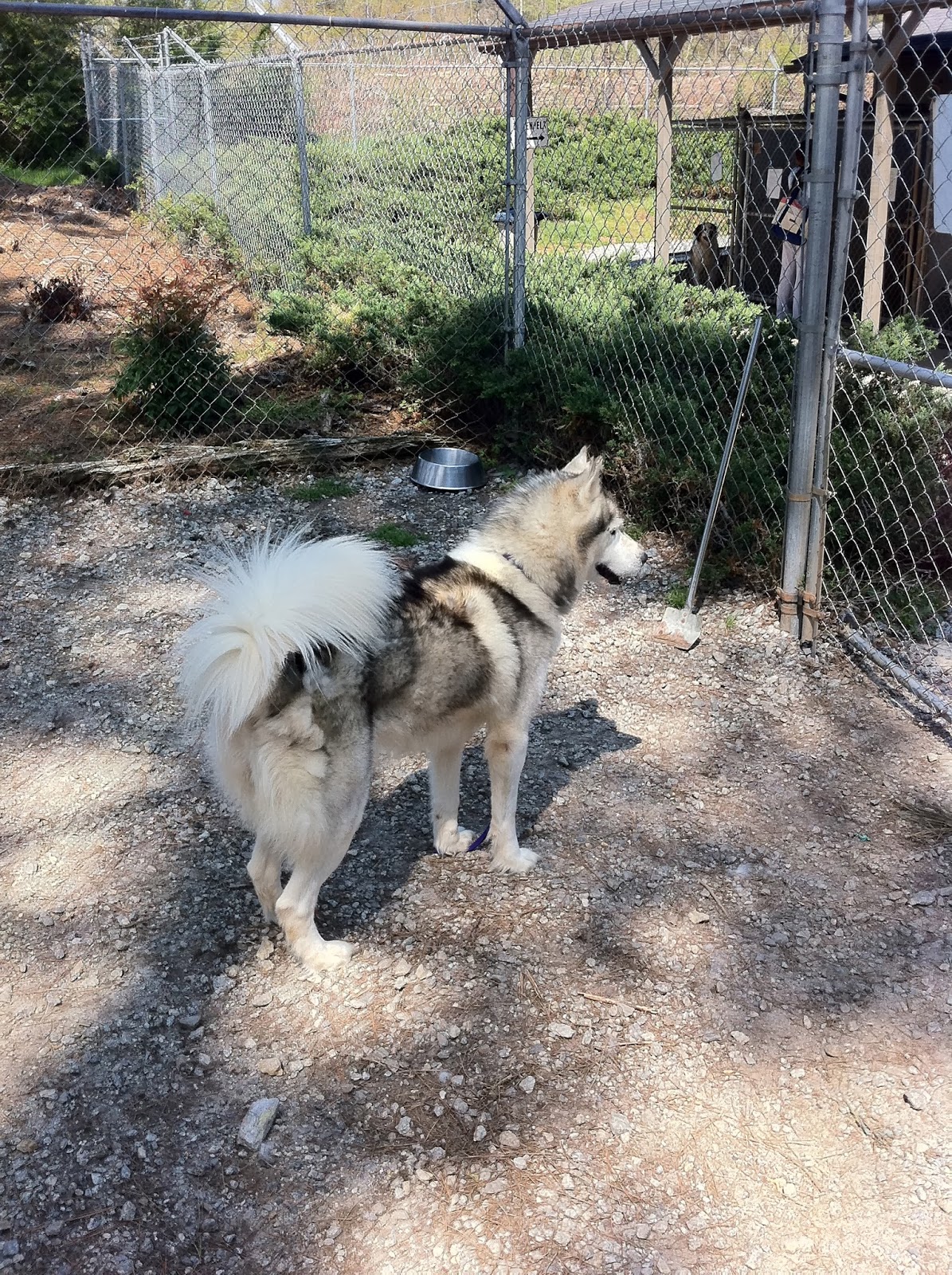 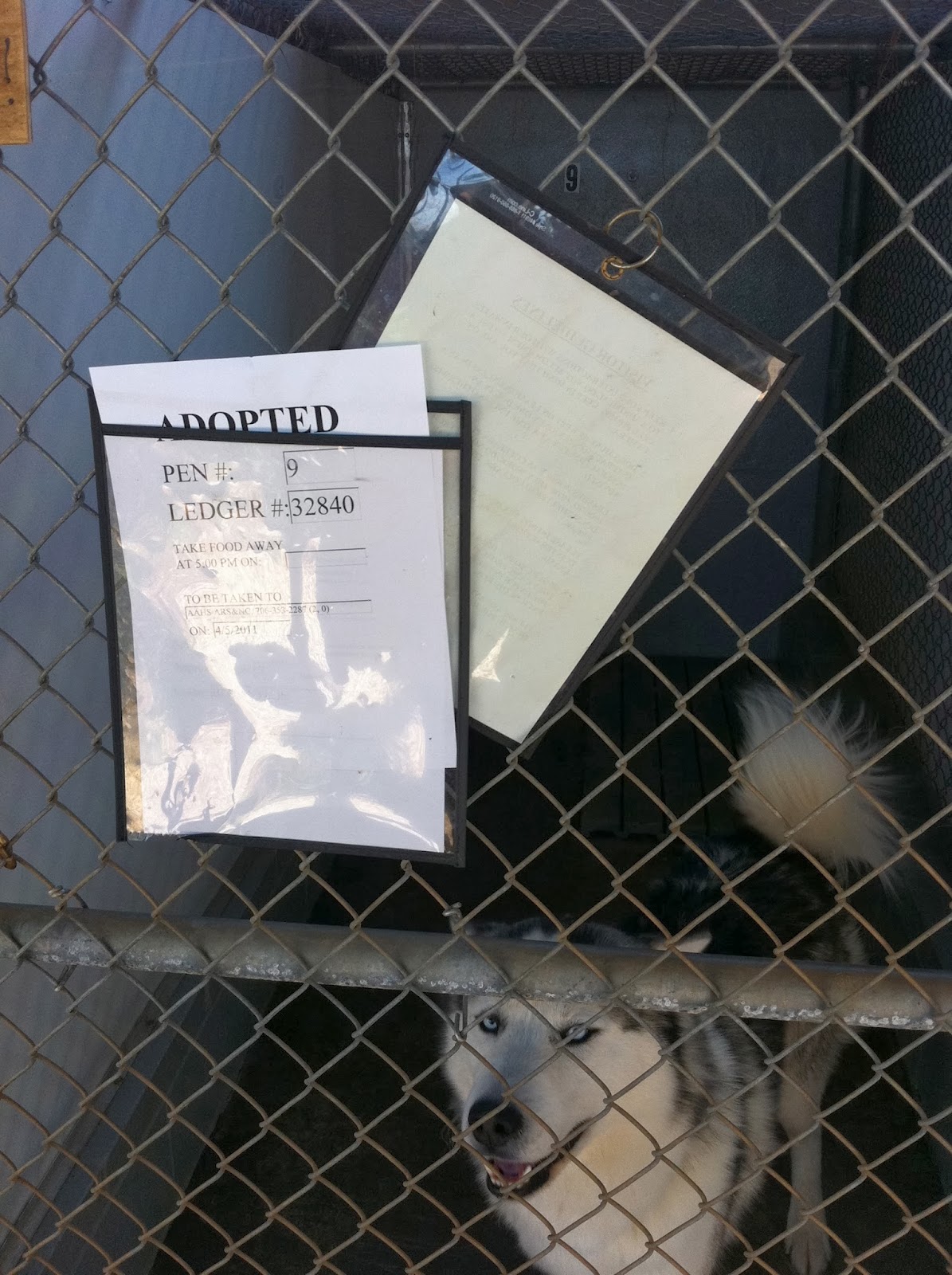 As most of you know, Jasper lives with Haley in Athens. I like to say we all share custody because he really is all of ours.

Chris and I adopted Darla two months shy of our one year anniversary. Gus came along about 3 months later. We love them to pieces and have gotten spoiled because cats are so easy to take care of. Once we bought our house we started talking about getting a dog since we have a fenced in back yard. We never could commit because we were both scared of having a dog. They are much more work than our little cats!

In January we saw on Facebook where someone had found a husky puppy and were looking for its family. My mom called to talk to them and told them we would be interested in having her if they couldn't find her family and weren't going to keep her. After they had her about two weeks they called us and said they couldn't find her family so if we were interested we could come get her that day. I was in Cartersville so my Mom and Haley went to get her while I headed home to meet them.

The vet thought she was about 7-8 weeks old and she weighed about six pounds. She was a tiny little thing! She had a multitude of parasites: coccidia, flatwork, roundworm, you name it! Her poor little face looked sickly and her fur wasn't very soft. She was obviously starving! We don't know where she came from but I can guarantee you that the "breeder" didn't take good care of her and probably her family if I had to guess. I'd love to know so that I could make sure her poor mama is okay.

We've had her about a month now and she's doing much better! At her last vet appointment she weighed 14.7lbs! We finally got rid of her parasites and she has one more round of vaccinations to go. We feed her better food than feed ourselves and she has more toys than she can even play with in a day. She'll be starting puppy classes soon but already has a few tricks. She is almost potty trained, loves her crate, rings the bell to go potty, sits, and fetches. Everyone who meets her falls in love!

I've never had a puppy before and she gets the best of us sometimes but we are having so much fun with her!

Get ready for picture overload… 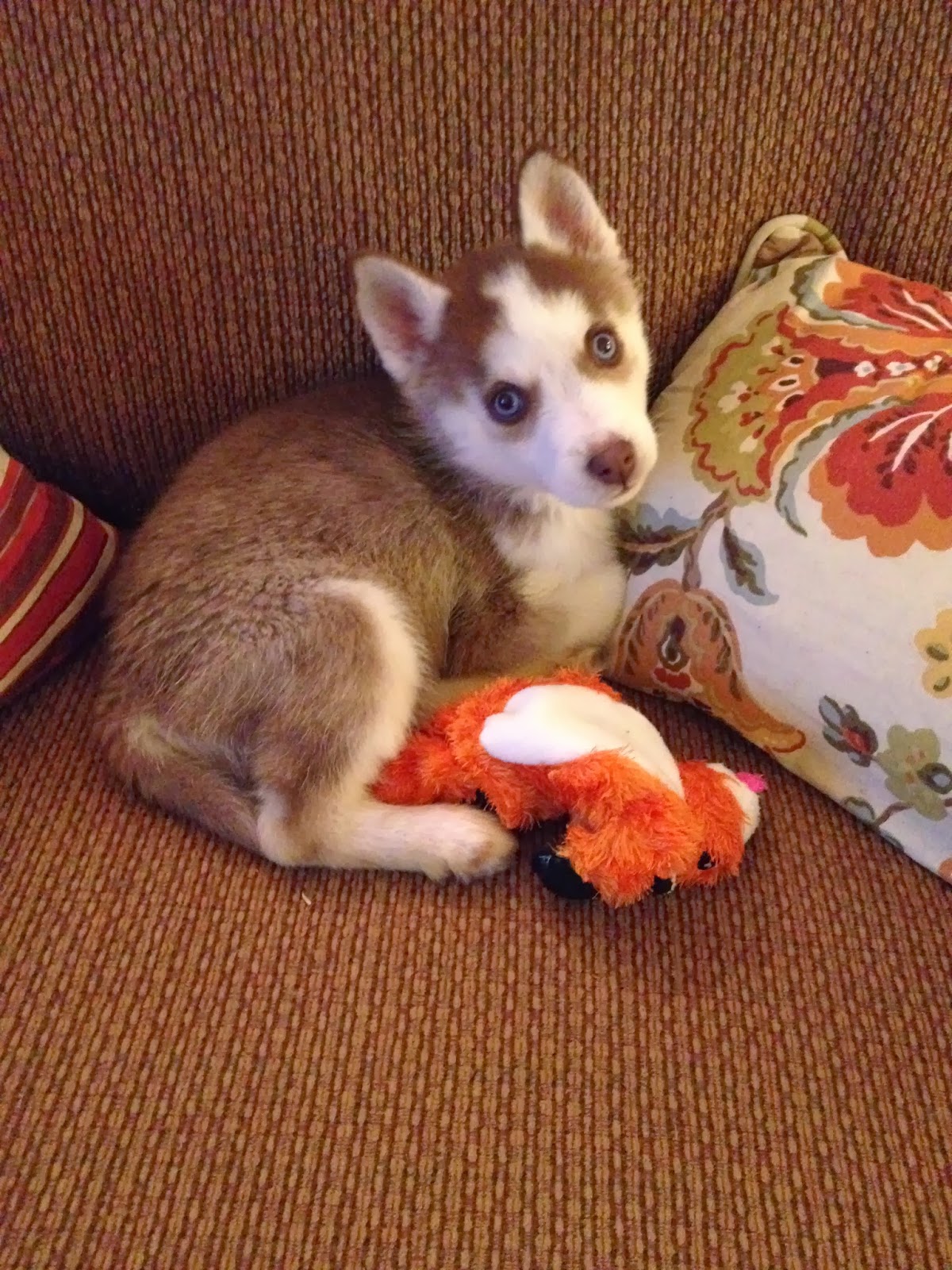 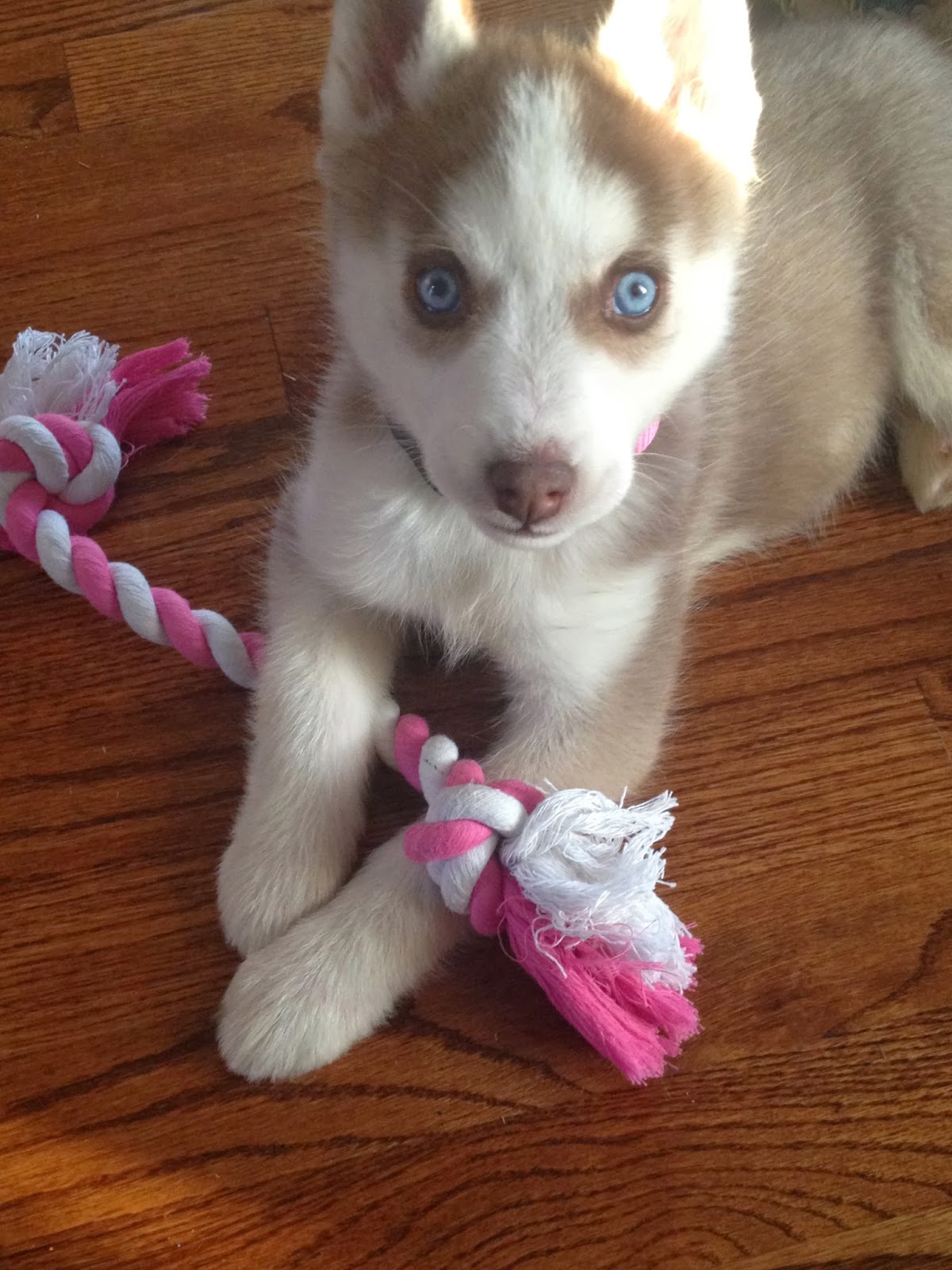 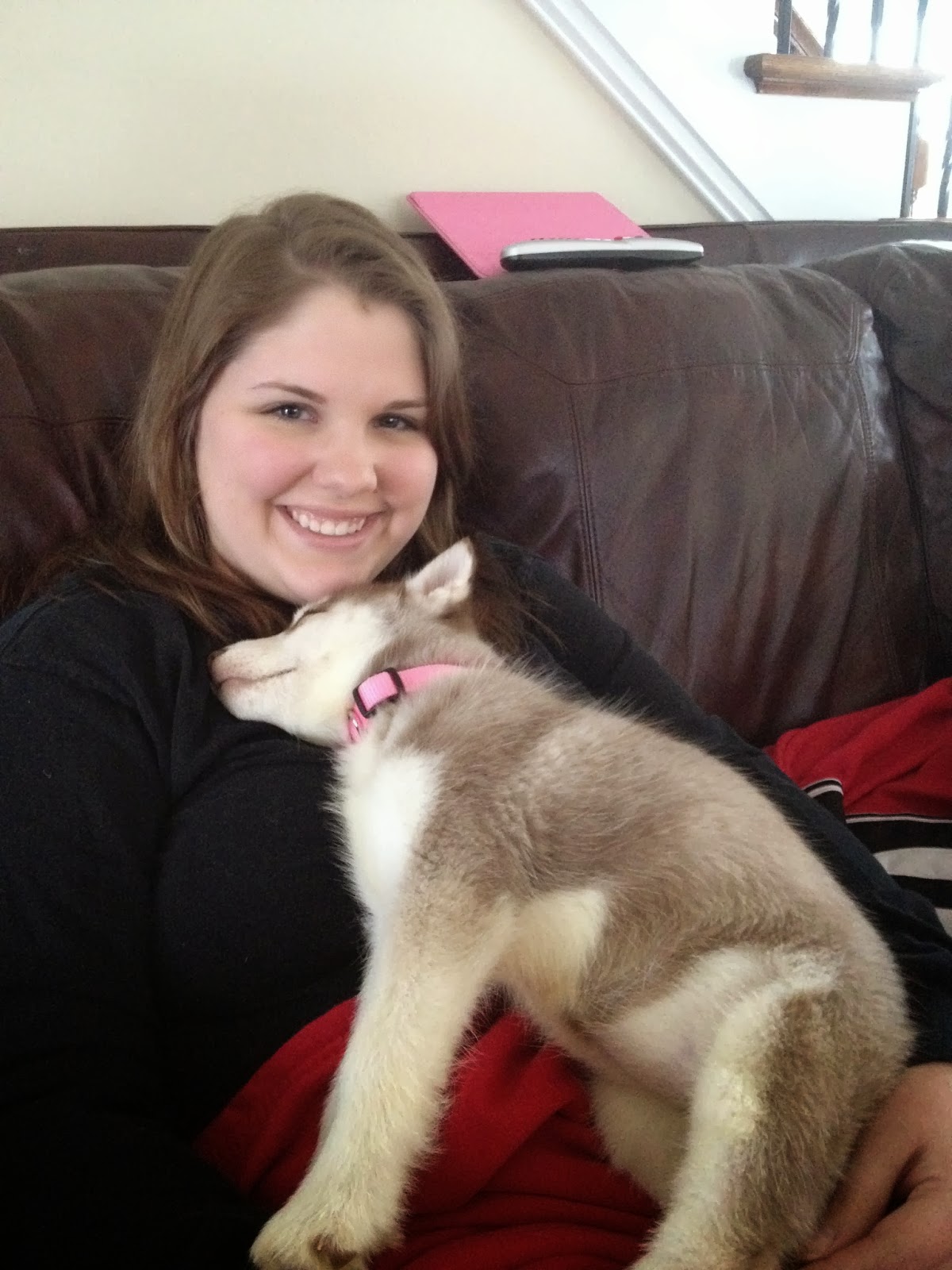 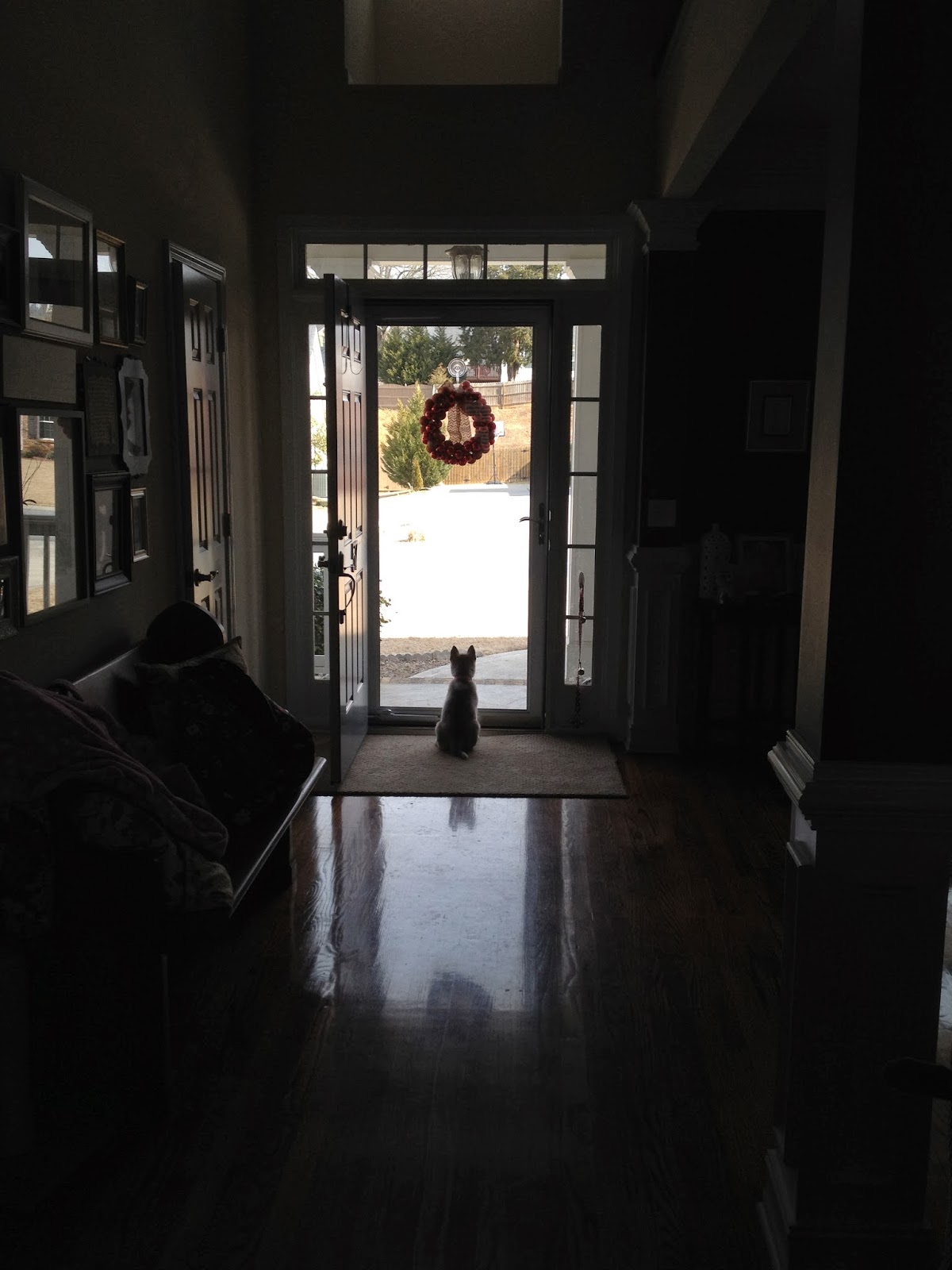 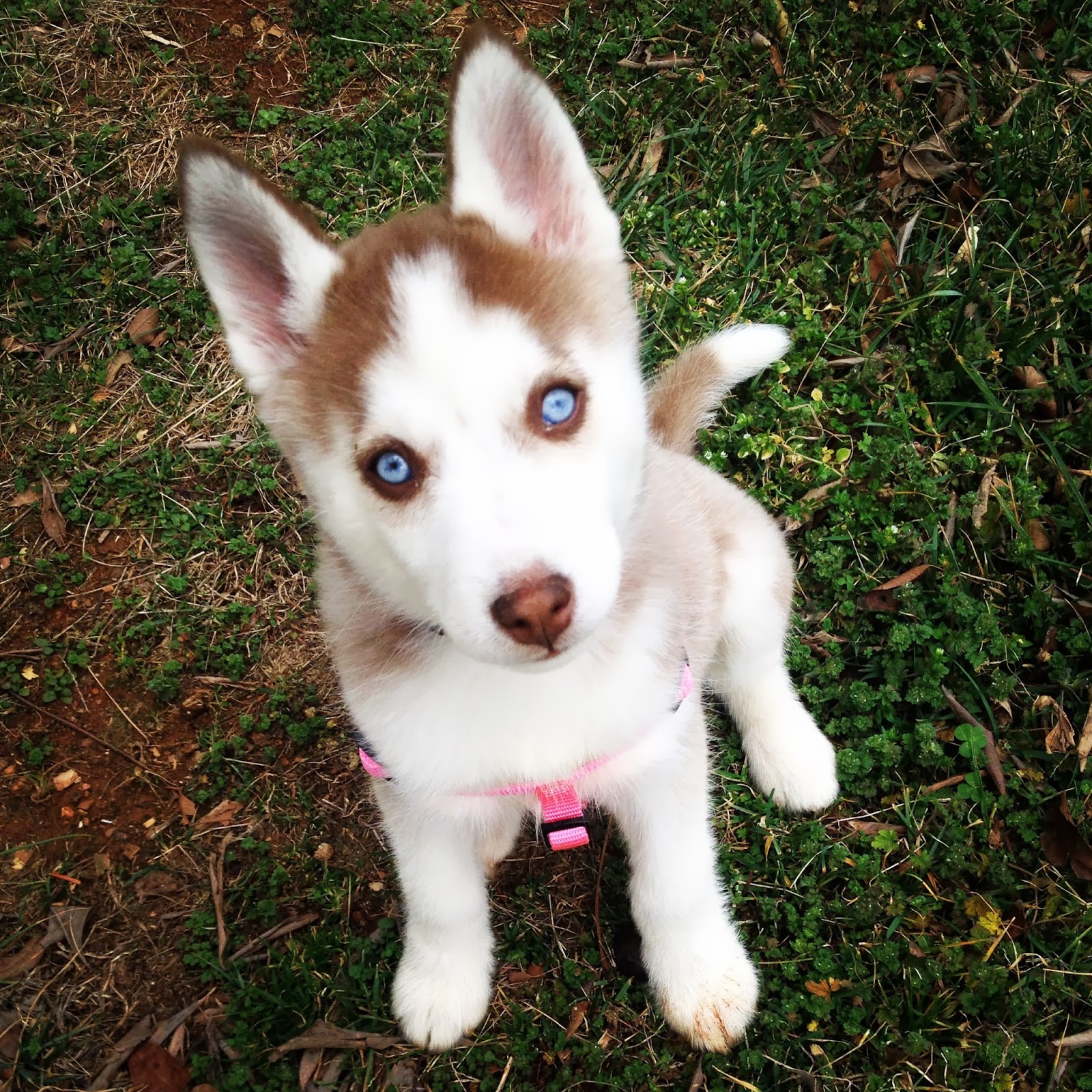 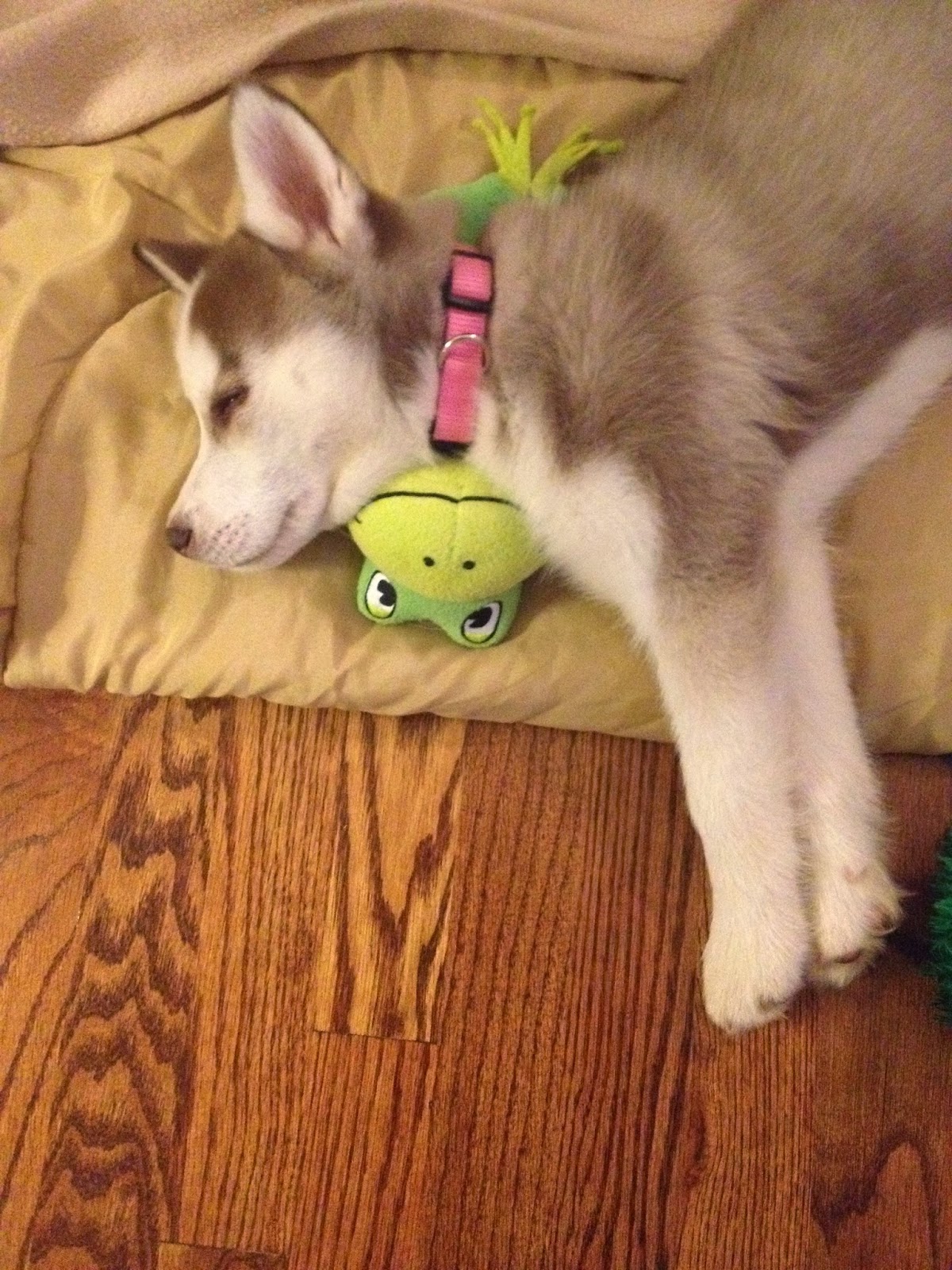 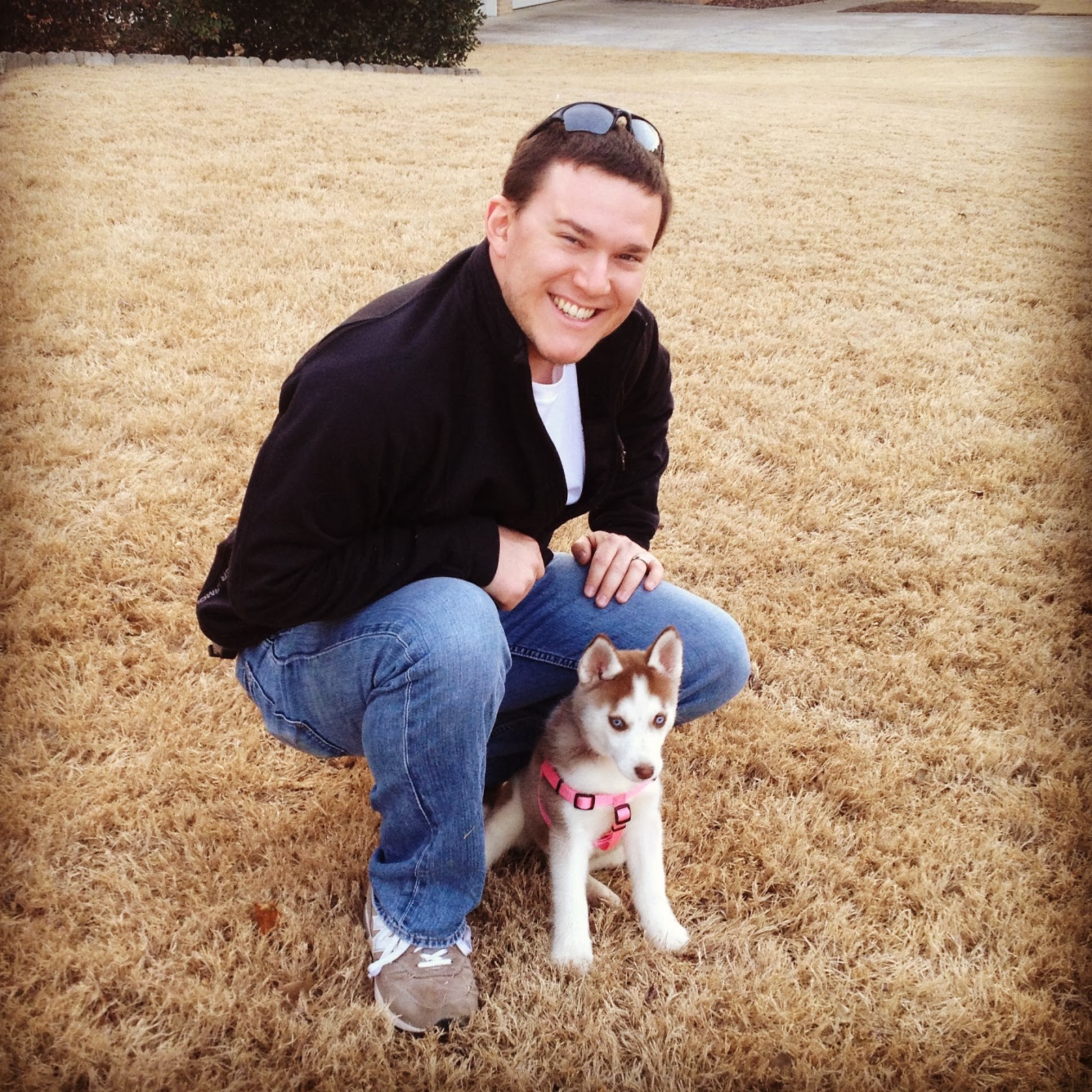 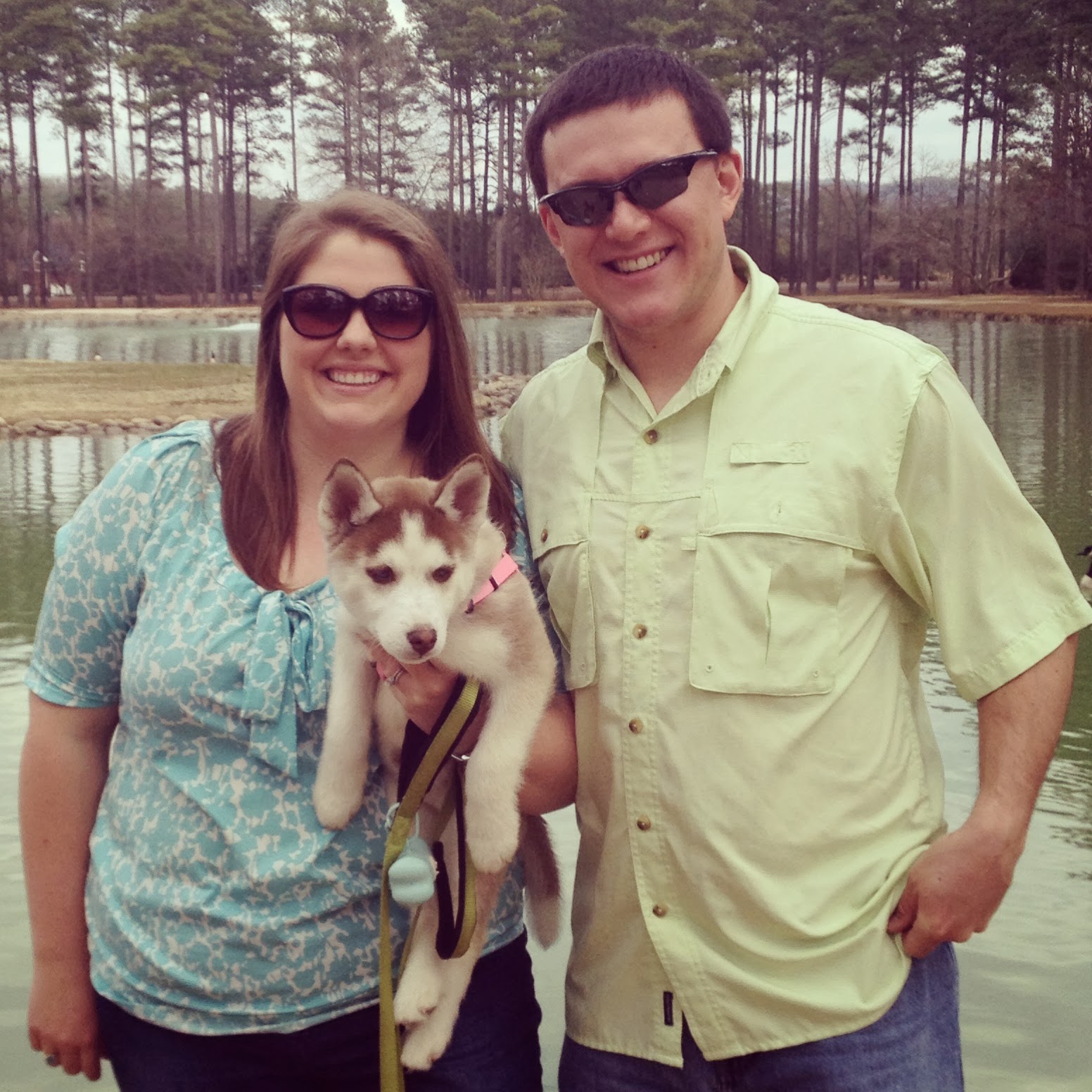 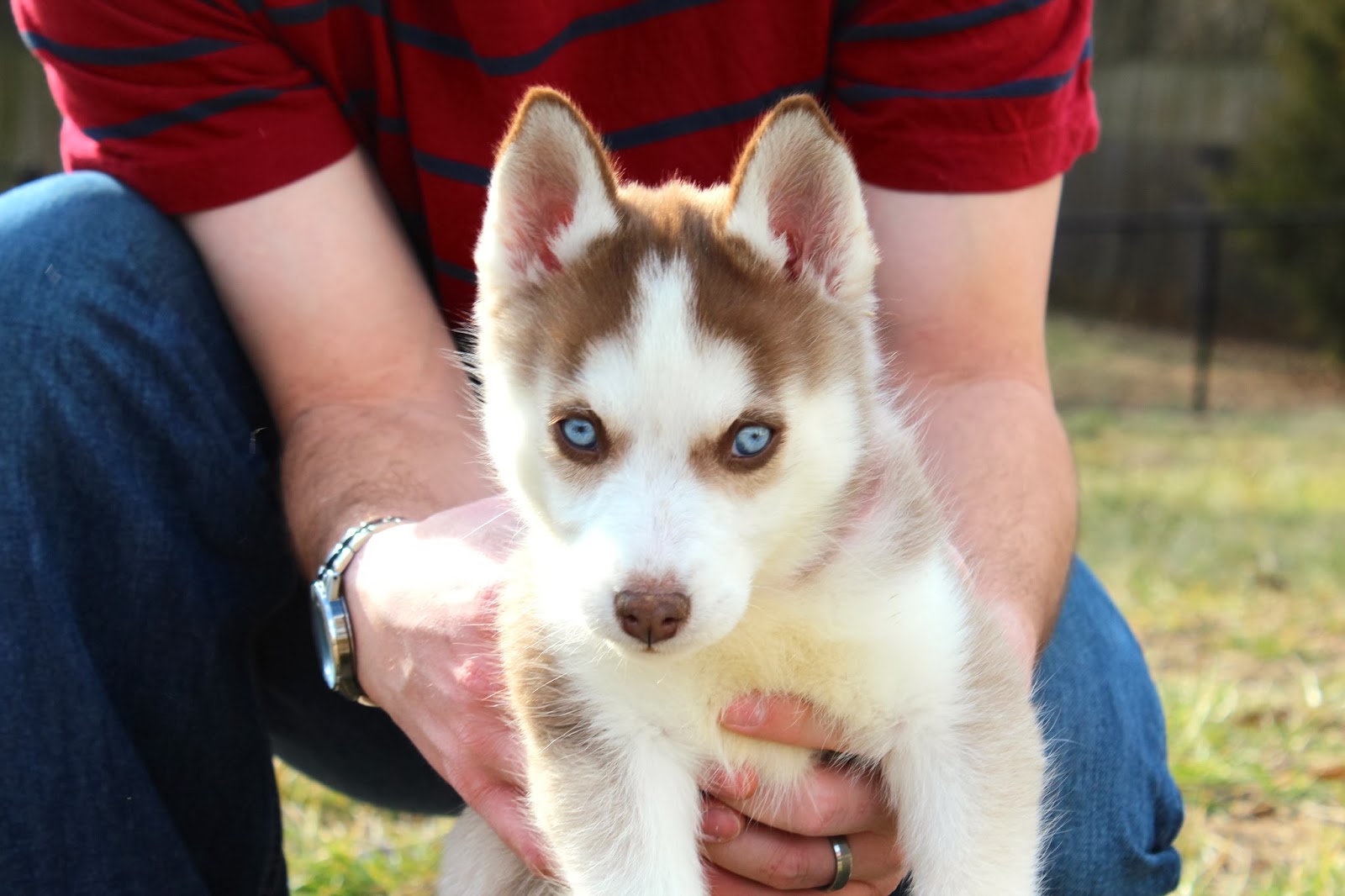 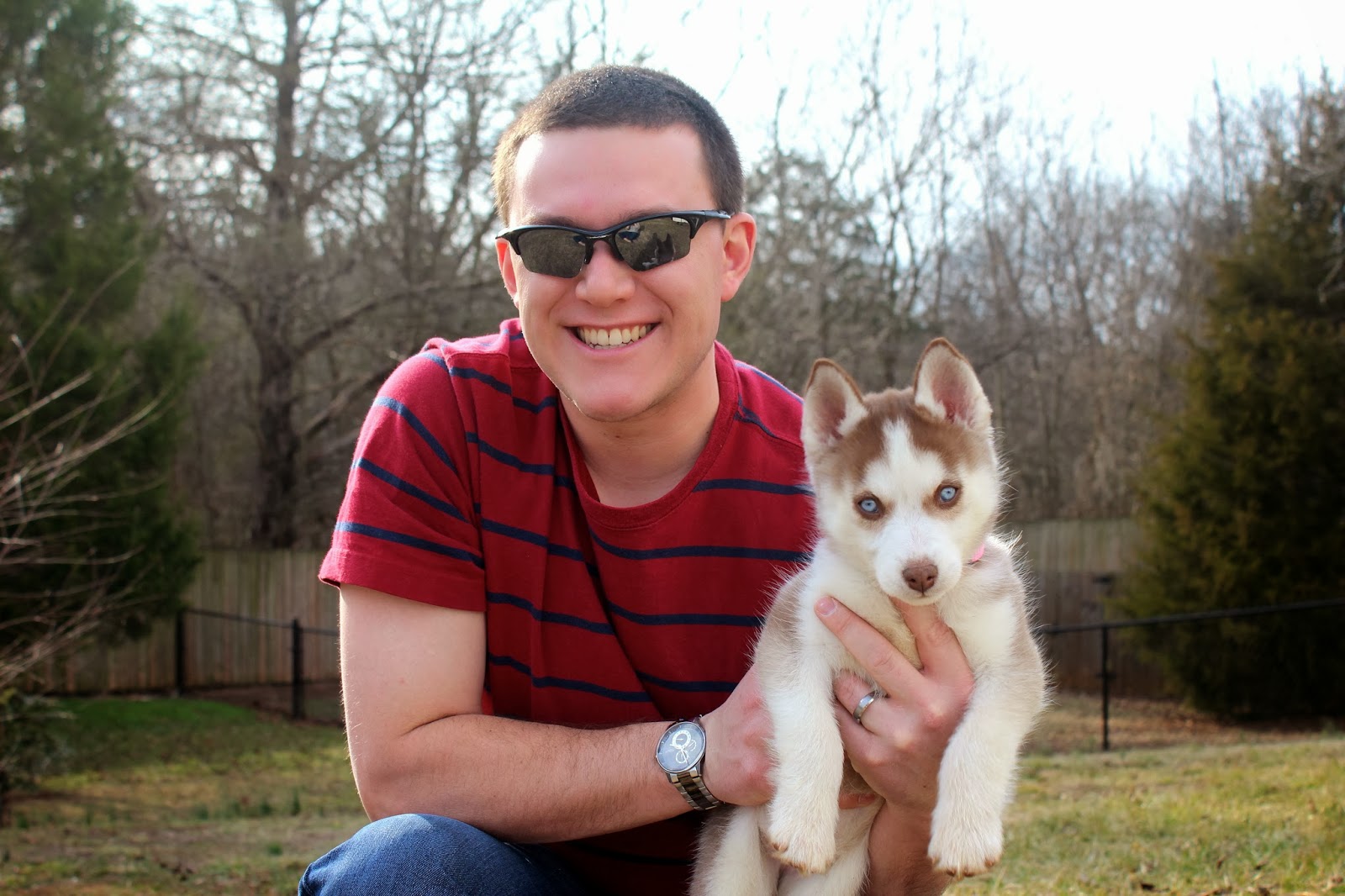 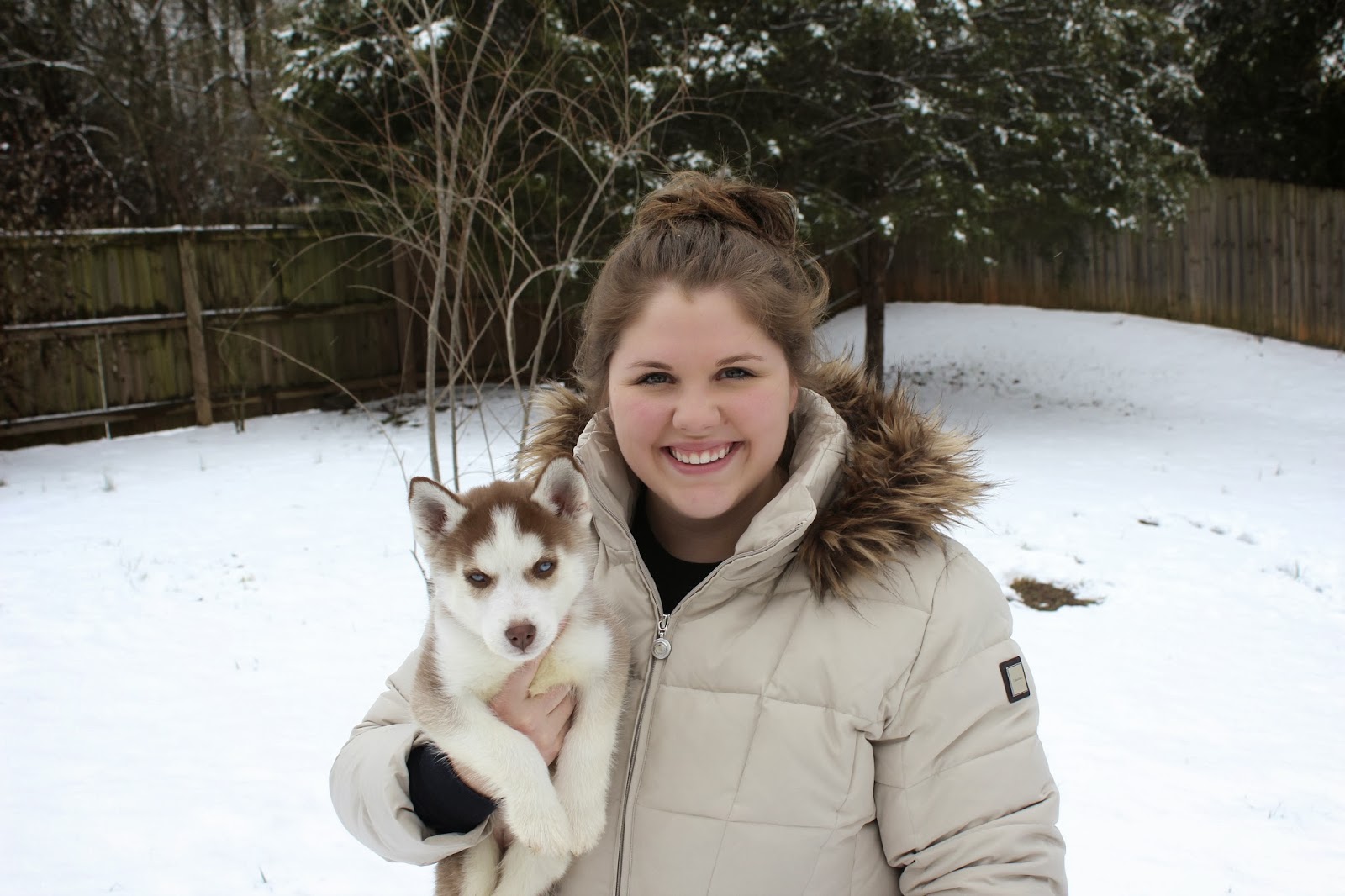 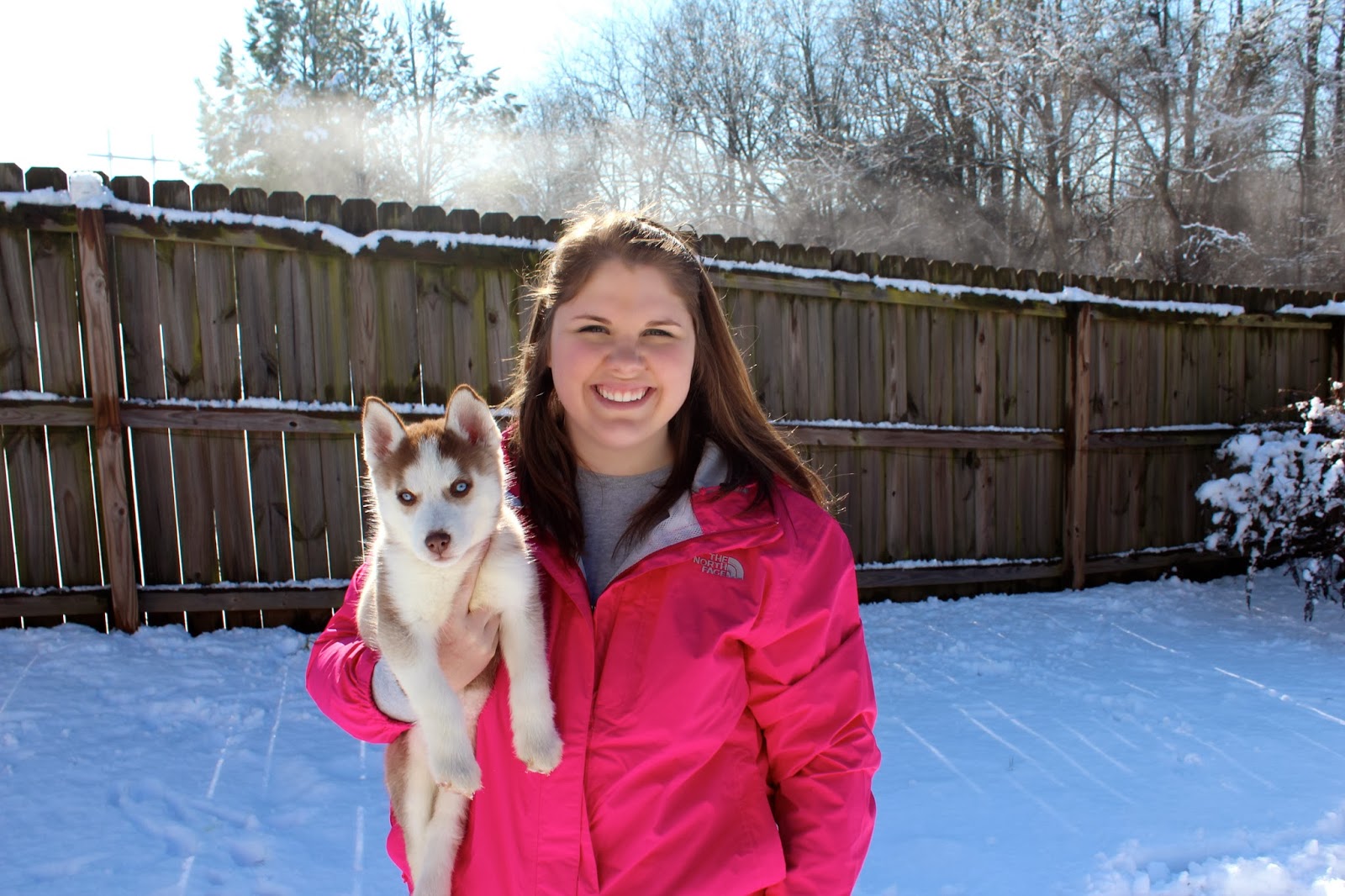 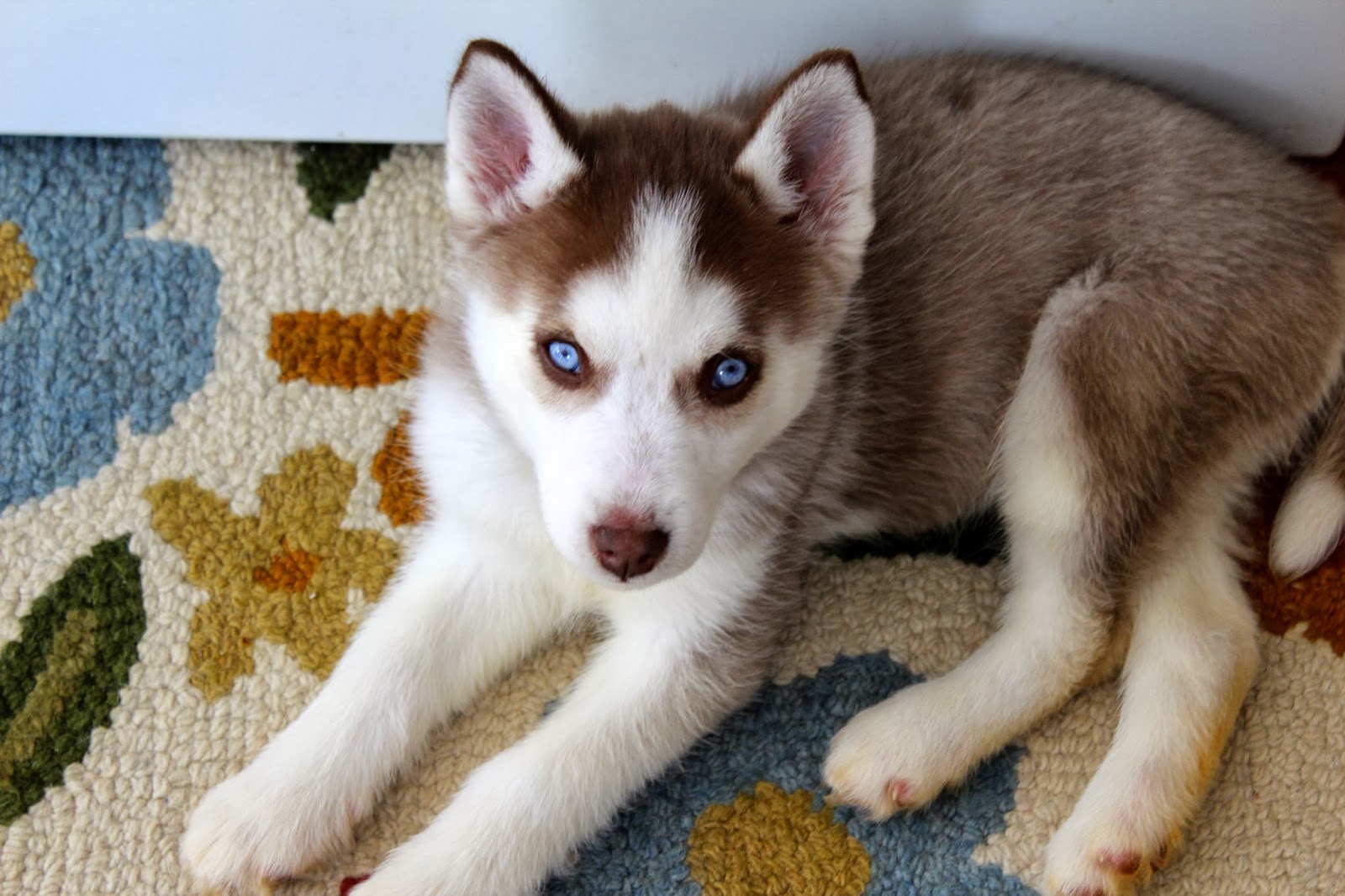 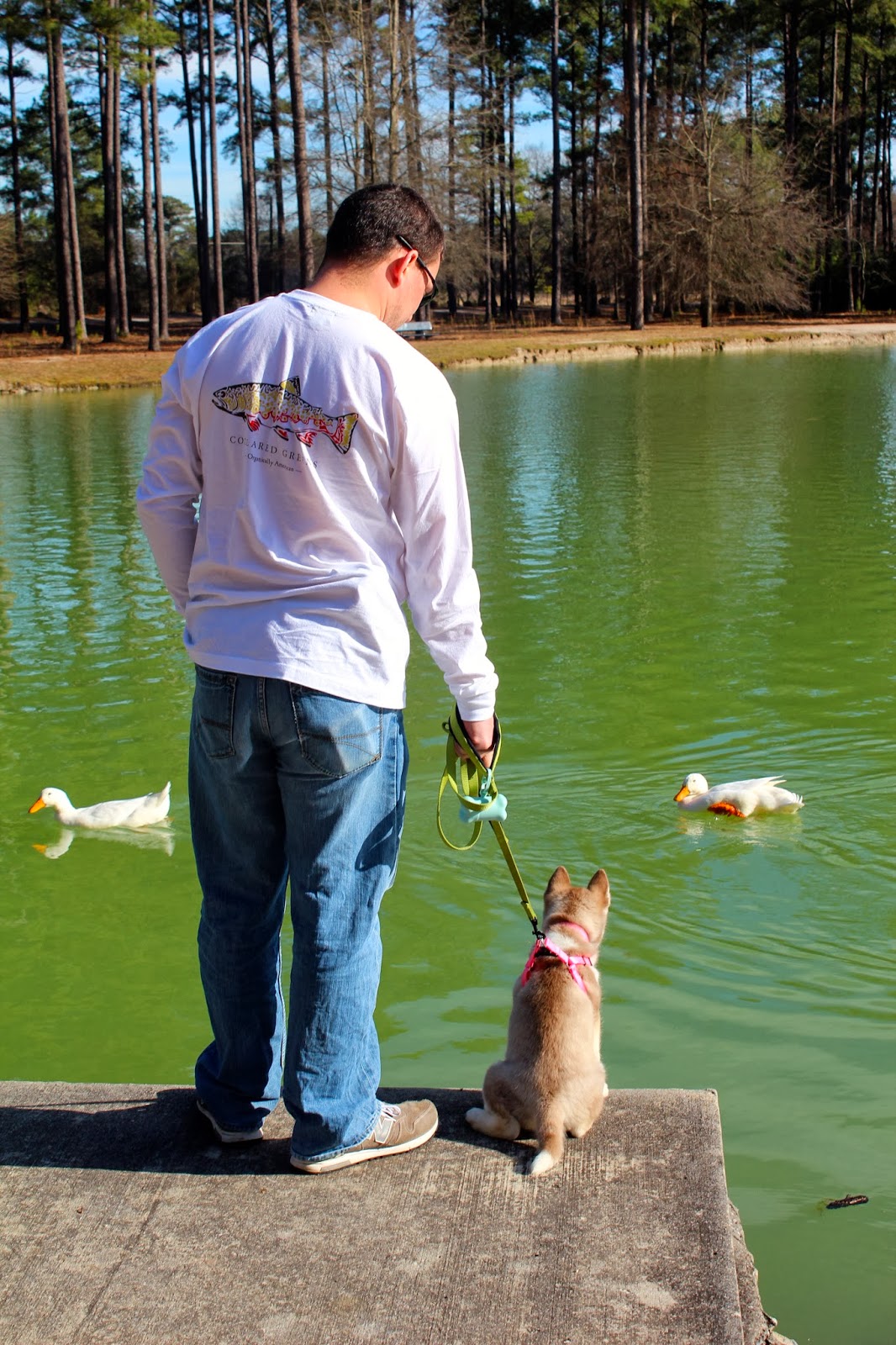 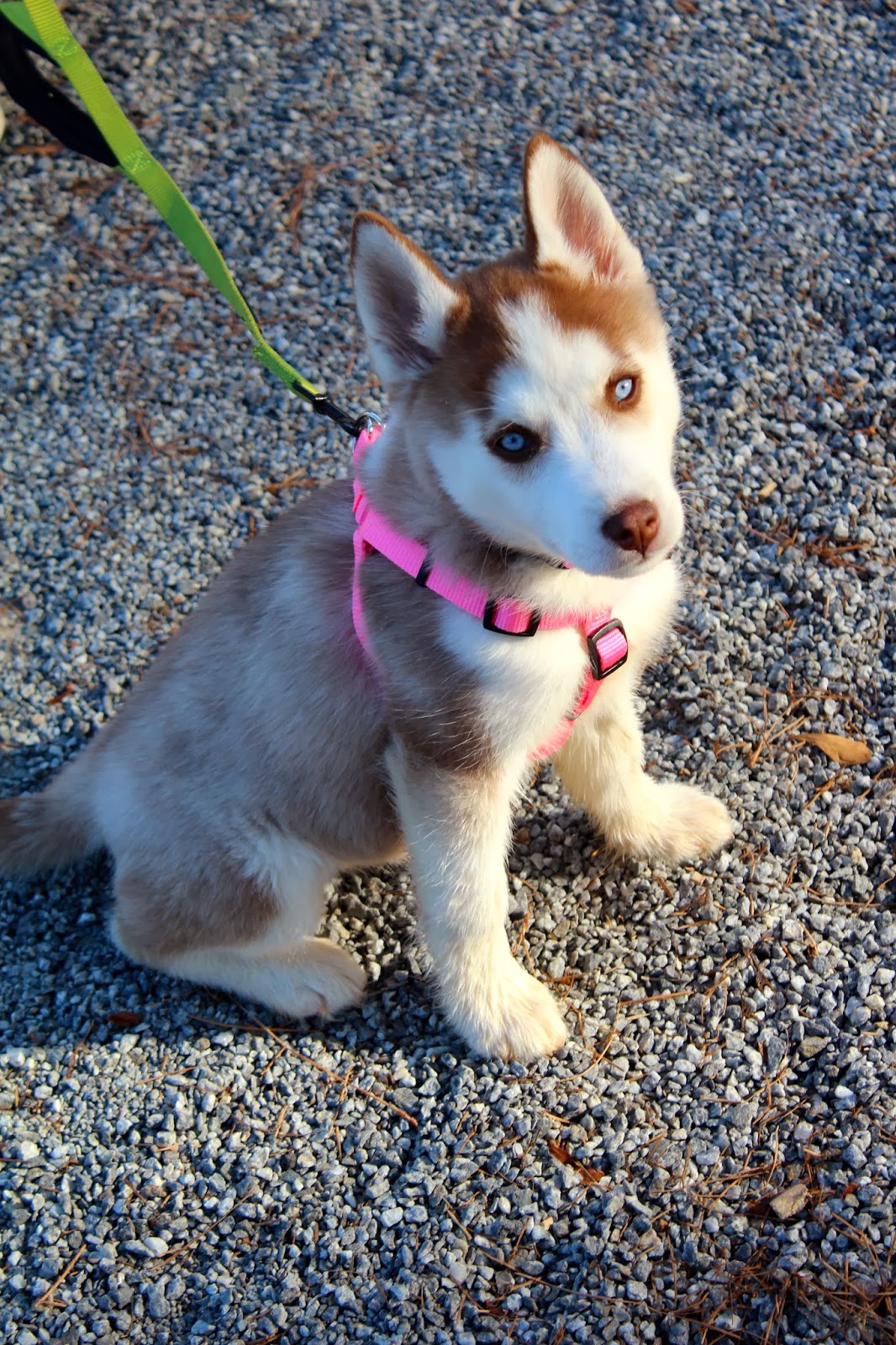