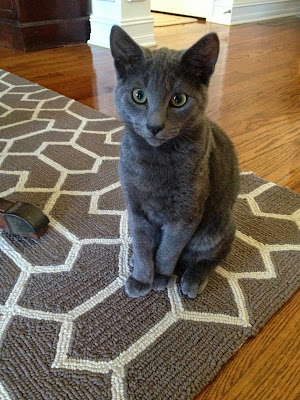 We have had him over a week and we still haven't decided on a new name. We're worse than Will and Kate up in here! Maybe we will just go with George...

My mom is the Director of Nursing at one of the women's prisons in Georgia and he was born on the prison grounds in May. His mom is feral and they haven't been able to catch her yet so she just keeps having babies.

My mom paid to have him vetted and neutered and they said he could stay. They found homes for his brothers and sisters but he has grown up at the prison.

I've spent my fair share of time in the jail and I know how sad and dreary they can be. I can't imagine how excited the inmates were to have him to play with!

For one reason or another my mom was told he had to go so I told her we'd take him. She felt so bad for him and the inmates that have gotten to know and love him. She said they told her it was like losing their baby! Bless them!

We brought him home and he and Darla are getting along pretty well. It was a little ugly at first but it's getting better every day. He's a couple of months younger than her but he's already bigger than her. She's super spunky so she's been chasing him all over our house! They literally chase each other night and day. Sometimes we separate them just to give them a break to nap and eat. I think once the newness wears off they will really love having each other! Especially while Chris and I are gone during the day.

He is the sweetest kitten I've ever met - and I've met a lot of kittens in my day! He loves to be held, scratched, petted, and talked to. He will snuggle with you all you want! Whoever got rid of him just don't know what they're missing!

I think God molds our hearts to feel, desire, and love certain things. I know he created my heart to be a heart for animals. I am so thankful to have been raised in a family of animal lovers. From an aunt who has never turned down a homeless animal at her door step, to a cousin who will run across the interstate to save a chicken, to a sister who held a stray dog in its final moments after being hit by a car, to a mom who has spayed, neutered, and donated more than I can even imagine to help animals and organizations who need it. They are the perfect example of God's love and how HE loves ALL of us despite our worldly worth. Blood line and looks don't matter to him.  He loves us and gives us grace all the same. Do we treat all Gods creatures the way that he treats us?

Happy Friday, y'all. Have a great weekend!