Today I'm linking up with Stephanie and Sarah for Friday Happies and Crappies!

Let's get the Crappies out of the way first!

1. Darla is driving me INSANE! She is like that little Sour Patch Kid on the commercial! First she's sour, then she's sweet! She will snuggle with me then turn on me when I least expect it. I guess she really is gaining her animal instincts because she bites me with those sharp little teeth in the places where it hurts the most - like the underside of my arm or the back of my ankle. She also has recently decided she loves fruit. She will eat anything and will do anything to get it! Patience, Lord, I need patience!

Helping me set up my {Gallery Wall}

2. Have I mentioned I hate doing laundry? Well, y'all, I hate doing laundry. It is my least favorite household chore. Every time I wait until I have fifty pounds to do I swear I'll never do it again... but I do. This is the predicament I'm in again... so this weekend will be laundry weekend. Why am I such a procrastinator? Yuck!

3. Obviously I don't eat enough vegetables. There's a lot of evidence I could use to support this claim, but let's look at the most recent incident. I had big plans to cook some new vegetable dishes this week. Chris and I went to the grocery store and bought lots of meat for grilling and lots of vegetables. I bought some mini cucumbers that are so delicious and we've been eating them all week. I also wanted to grill some zucchini so I bought three big pieces. I get them out to put on the grill last night and I realize they aren't zucchini... they are cucumbers. DANG IT. So now we are up to our eyeballs in cucumbers around here! Anyone want to come over and have some cucumbers for dinner?

And now for the Happies...

1. After living in our new house for two months now, we finally got the garage cleaned out! It has been home to my ongoing projects and basically just a lot of random crap. We moved everything we don't use on a regular basis to the basement and now we can fit both of our cars in there again. Next up, we really need some shelving units in there for some storage. I've seen several I like on Pinterest.

2. Earlier this week I had a hankering for a donut. Haley and I passed Krispy Kreme when the hot sign was on and I surrendered to my craving... It was late so we were glad they were still open. We ordered a half dozen but since it was closing time they threw in the other half for free! What's better than donuts? Free donuts, y'all! 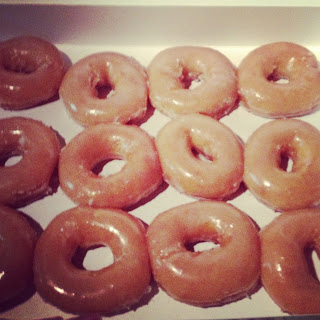 3. Chris and I met my dad in Canton for lunch this week. I love Which wich and was so excited to get to have lunch there! There was one in Athens that I loved but it closed down and I haven't seen another one since. His birthday was this week so this was his fancy birthday meal! ;)

4. We finally splurged and got some new bedding! I have had the hardest time sleeping lately because I'm so hot and uncomfortable. We got new sheets, a new quilt, and a new duvet, and it has made the biggest difference! These two approve too...

5. I'm a big fan of breakfast. It's by far my favorite food. I finally tried a biscuit from a local place in Cartersville called Martin's and it did not disappoint! There's nothing in the world I love more than a good biscuit!

Happy Friday, y'all! I hope you have a wonderful weekend!