So I had no intentions of writing a post about what I cooked for dinner last night, but I also didn't realize it would be so delicious! I didn't take any action shots but here's a couple after I was done cooking: 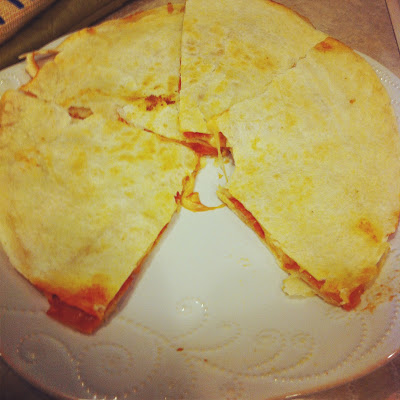 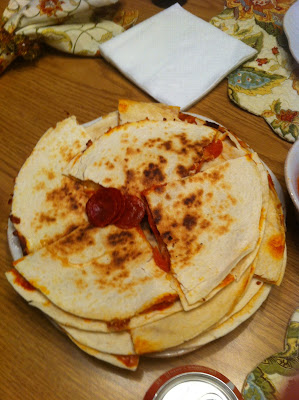 I made pizza quesadillas and they were SO delicious! Chris is totally obsessed with them already. It didn't occur to me that they are perfect for me since I'm not a fan of thick dough or a lot of pizza sauce. In other words that means I love the cheese and pepperoni... shocker! This go around those were the only toppings I used, but next time I'll probably add some chopped peppers and onions for flavor.

Here's what I used:

First I fried the pepperoni in my black skillet on medium heat. It doesn't take much time at all since they are so thin. Be sure not to overcook them or they shrivel up and get tough. After frying them I recommend dropping them onto a plate covered with paper towels to soak up some of that nasty grease! After you're done pour out the left over grease so your tortillas won't get soggy.

To make the quesadillas use two tortillas for each. On the bottom tortilla spoon out as much sauce as you would like - I use very little sauce. Next add a layer of mozzarella followed by whatever toppings you are using and a little garlic salt for flavor. Then add another thin layer of mozzarella to bind the tortillas (be careful not to add too much - it takes less than you would think). Add your top tortilla and voila! I cooked my quesadillas in my handy dandy cast iron skillet on medium heat. I found that if it was any higher than that it would overcook the tortilla without properly melting the cheese.

I'm still getting used to cooking the appropriate amount for us - it's definitely taking some getting used to. I way overestimated how much we would eat last night! I cooked three large pizza quesadillas thinking that Chris would eat a lot more than he did. I barely ate half one and Chris had a whole one so we had a lot left. The good news is they reheated well for lunch today! Yum!

Email ThisBlogThis!Share to TwitterShare to FacebookShare to Pinterest
Labels: Recipe